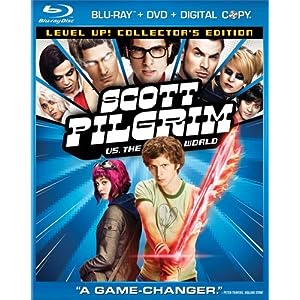 I will admit that the only reason I started watching Scott Pilgrim vs. The World was because I am a fan of Michael Cera from the Arrested Development series (one of my favorite TV shows of all time!). His delivery of “feeble” lines is wonderful! Anyway, I really didn’t know anything about the movie except a couple of trailers I had seen months ago.

It starts out as a typical young love story (a la Juno), but quickly becomes a visual feast! The effects kept my interest enough to want more! I am not a big fan of action movies nor superhero stories (except for Wonder Woman), but this was romantic enough to make up for fight scenes. It was comedic enough to make up for drama. This actually had a little bit of everything in it, which made it extremely interesting. It actually had enough going on to make me think of another movie that had a bit of everything-American Beauty. That movie had so many story elements to make it a very deep and complex movie.

So, I would highly recommend this movie for anyone! Gamers, romantics, action lovers, people who like comedies, etc.

On a separate note:

I watched SAW 3D/7 and that’s another film series that keeps me interested. One of the things I love about those films is the addition of storylines to previous films. I like the fact that they can go back and insert scenes into flashbacks and come up with a new twist on the old plot! These films are extremely gory(which I usually don’t like), but the basic plot is choosing to do right in your life… or pay -with your life.